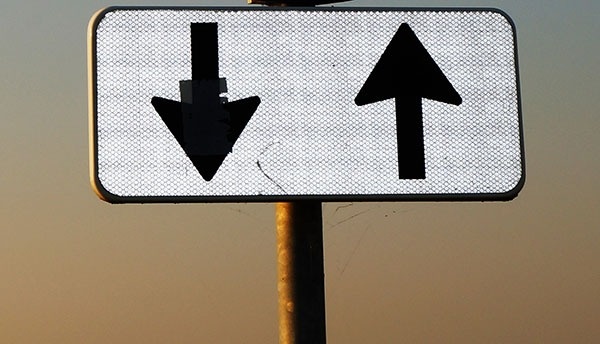 Are We in a Recession Right Now?

In July, the preliminary gross domestic product (GDP) report for the second quarter of 2022, which is considered the first estimate of national economic growth, showed a decline by 0.9 percent from last quarter. This is the second consecutive decrease, although it’s an improvement over last quarter’s drop of 1.6 percent.

By some definitions, a recession is identified by declines in the GDP for two quarters in a row, which is why this report triggered headlines indicating that we’re now officially in a recession. But are we?

Before you worry too much, you need to know a few things. First, the formal definition of a recession isn’t that simple—and by other standards, we aren’t in a recession yet.

Second, when you look at the causes of those declines in both quarters, they are not what drives a true recession, but more of a technical recession, if you even want to call it that.

A recession, to the average person, is when the economy shrinks (which is happening). But evidence of a shrinking economy includes job losses, stores closing because people aren’t shopping, and the general kind of misery that affects day-to-day life. When we look around, that’s not what we see.

While two negative quarters of GDP growth generated headlines and drew attention, it’s important to note that a formal recession is more complicated than simply looking at quarterly GDP growth figures. By that definition, we’re not currently in a recession.

Additionally, when looking at what led to the slowdown in growth during those quarters, it becomes clear that negative outcomes were largely driven by technical adjustments caused by the aftermath of the COVID-19 pandemic. Traditional drivers of economic growth, such as job creation and personal consumption, remained solid during the first half of the year and indicate that economic fundamentals are healthier than the headline GDP reports would suggest.

This year’s first- and second-quarter declines were due more to adjustments in the aftermath of the COVID-19 pandemic than real economic weakness. Exports dropped enough to take overall growth into negative numbers during the first quarter but have since rebounded. In the second quarter, much of the weakness was due to businesses continuing to cut their inventories—not because of sales declines. As the economy continues to recover from the pandemic, however, what people are buying has changed. In both cases, this is a post-pandemic adjustment, not something worse.

Another factor is gross domestic income (GDI), the much-less-reported twin to GDP. GDP is purchases, and GDI is income. In theory, they have to be equal. They are usually quite close, but so far we’ve had a discrepancy this year: GDP is down while GDI is up.

When this kind of gap has opened in the past, GDP often ends up being revised to match GDI. Growth in income usually means growth overall, and that’s what we see on a longer-term basis. The annualized quarter-over-quarter number is what’s reported, but the year-over-year number (in which the economy is compared to where it was a year ago) still shows growth. It shows slower growth, but it still shows growth.

Consumer spending also showed signs of growth during the month. Retail sales rebounded in June, with both headline and core sales increasing by more than expected. This was echoed by June’s personal income and spending reports, which showed that consumers earned and spent more than anticipated. As you can see in the chart below. this marks six consecutive months with consumer spending growth following a temporary lull in spending at the end of last year. 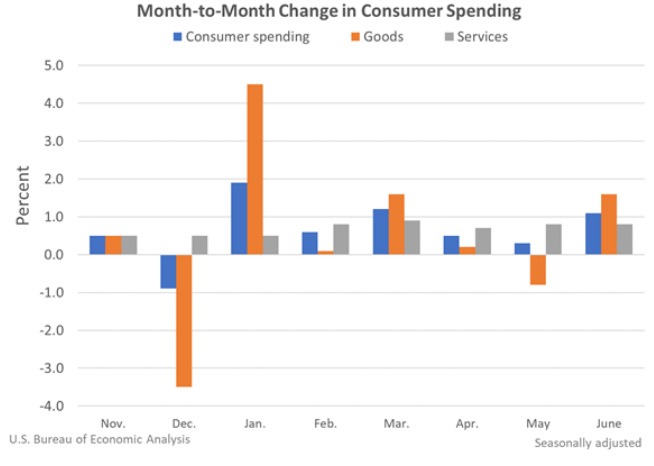 This extended period of consumer spending growth was especially notable given the declining consumer confidence we saw during this time. High inflation, rising gas prices, and market selloffs all contributed to the drop in confidence to start the year, but there are reasons for cautious optimism, including a slight rise in consumer confidence in June.

Gas prices are down compared to their recent peak in mid-June, and there are other signs that inflation may be peaking as the Federal Reserve (Fed)’s attempts to slow the economy appear to be taking hold. While risks to consumer spending growth certainly remain, the bulk of that risk is likely behind us for the time being and there is potential for even faster growth toward the end of the year if inflation starts to fade.

Business spending also showed signs of continued growth during the month with better-than-expected headline and core durable goods orders growth. While business spending growth has slowed compared to last year when businesses were investing heavily due to reopening efforts, business spending remains solid and indicates that business owners are continuing to invest to try and meet high levels of demand.

Make no mistake, the data is showing that growth has slowed across the board and will likely continue to do so. For example, the Conference Board Leading Economic Index®, which is designed to forecast future economic activity, declined by 1.8% during the first half of the year, suggesting that economic growth will slow down over the near term as recession risks grow.

Domestically, the major concern is still inflation, which could lead to further market turbulence if inflationary pressure remains stubbornly high. Additionally, while medical risks have largely declined from their peak, we could still face another wave of COVID-19 infections, which might negatively impact the economy and markets.

We could be looking at a real recession sometime in the next year or so. But, despite the numbers, we’re not there yet. Job growth is still strong, businesses are still investing, and national income is still growing, none of which happens in a recession. If that’s what we’re calling the current economy, it’s better in some ways than many non-recessionary periods we’ve seen in the past decade.

Ultimately, despite risks to both the economy and the markets, the most likely path forward is growth—albeit slower growth than we’ve seen since reopening efforts began in earnest last year. We’re likely to experience setbacks and turbulence along the way, but economic fundamentals are solid and should help support long-term growth.

Even if the headlines shout “recession,” the average person is still able to work and shop despite inflation and other hardships. So, as recessions go, we can consider ourselves lucky if our current situation is as bad as it gets.