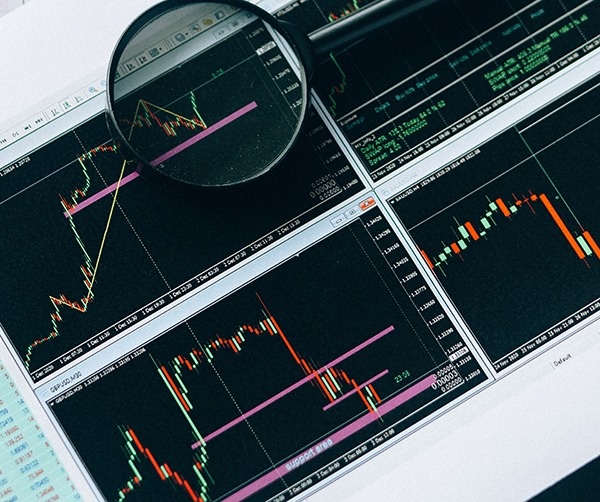 This article is authored by Brad McMillan, CFA®, CAIA, MAI and Sam Millette.

Markets sold off in early- and mid-May due to concerns of slowing economic growth before a late-month rally brought them close to even. The month-end rally led to mixed results for the three major U.S. equity indices. The S&P 500 gained 0.18 percent while the Dow Jones Industrial Average (DJIA) notched a 0.33 percent return. The Nasdaq Composite was unable to rebound, with the index down 1.93 percent in May.

These mixed results came despite improving fundamentals. Per Bloomberg Intelligence, as of May 27, 2022, with 98 percent of companies having reported actual earnings, earnings growth for the S&P 500 in the first quarter was 9.1 percent. This is up from both April’s 8.7 percent and analyst estimates for 5.2 percent growth at the start of earnings season. First-quarter outcomes were impressive given the headwinds companies faced due to rising Covid-19 case growth early in the year and persistently high inflation throughout the quarter. Fundamentals drive long-term market performance, so continued earnings growth is a good sign for long-term performance.

While fundamental factors were supportive during the month, technical factors were not. All three major U.S. indices ended the month below their respective 200-day moving averages for the second month in a row. The 200-day moving average is a widely monitored technical trendline, as prolonged breaks above or below this level can signal shifting investor sentiment for an index. It’s too early to say if investors have soured on U.S. equity markets, but back-to-back months below trend are a potentially concerning development and indicate market-related concerns despite the late-month rally.

International markets fared slightly better than domestic markets in May, though both developed and emerging markets saw selloffs before rebounding into positive territory. The MSCI EAFE Index gained 0.75 percent while the MSCI Emerging Markets Index gained 0.47 percent. Despite the positive results for the month, technicals for international markets were still challenging. Both major international indices spent the entire month well below their respective 200-day moving averages, which marks the fifth month in a row when both indices have finished below trend.

As has been the case throughout most of the year, a major factor for market performance in May was interest rates. Unlike most of the year, the news about rates was positive, as we saw encouraging signs of long-term rate stabilization. The Federal Reserve (the Fed) hiked the federal funds rate by 50 basis points (bps) at its May meeting as expected; however, the market reaction to the rate hike was relatively muted given forward guidance for higher rates from the central bank throughout the start of the year. While long-term rates did see some volatility, they ended the month down notably from the intramonth high as investor concerns about persistent inflation started to decline.

Looking past inflation as well as interest rates and toward the pandemic, there were signs of stabilization during the month as well. Average daily case growth fell from roughly 62,000 cases per day at the end of April to roughly 47,000 cases per day at the end of May. While this is still higher than the recent lows we saw in March, it helps calm fears of another wave of case growth in the immediate future. That’s not to say that we’re out of the woods in terms of market and economic risk from the pandemic, but it does point toward possible lower pandemic-related risks in the months ahead.

May’s data releases showed signs of continued economic improvement. The April jobs report disclosed that more jobs were added than expected, marking 16 consecutive months with strong jobs growth. The unemployment rate was 3.6 percent, which matched the pandemic-era low and neared the pre-pandemic low of 3.5 percent. The labor market’s impressive progress over the past two years is a key reason why the economy remains in healthy shape and further improvements are expected in the months ahead.

The strong labor market continued to support solid consumer spending progress in April. Both retail sales and personal spending came in above economist estimates in April, which is an encouraging sign that the American consumer remains willing and able to spend despite rising risks earlier in the year. As you can see in the chart below, the absolute level of retail sales has increased well above pre-pandemic levels and growth has been strong in 2022 (following a slight lull in sales growth in December of 2021). 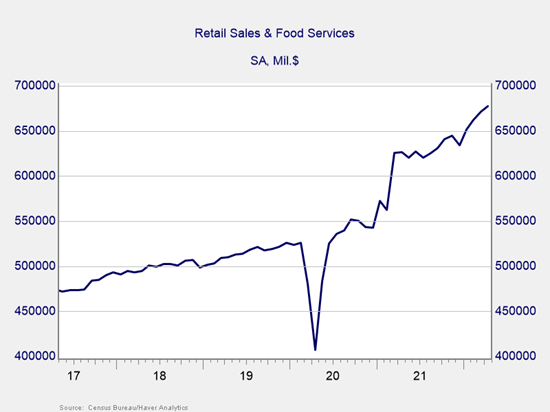 Business spending growth was also solid during the month, with durable goods orders up 0.4 percent in April. Businesses have continued to invest in equipment and other capital expenditures throughout the course of the year as business owners have rushed to increase capacity to meet high levels of demand. Industrial production and manufacturing output both increased by more than expected in April, which was another positive sign. Capacity utilization, which is a measure of actual industrial output compared with potential output, approached a 15-year high in April, highlighting continued recovery for manufacturers.

Despite solid results for consumers and businesses, the reports released in May showed notable signs of weakness for the housing sector. Housing was a bright spot in economic recovery following the expiration of initial lockdowns in 2020, as record-low mortgage rates and high levels of homebuyer demand caused sales and construction to surge.

In 2022, however, rising mortgage rates, a lack of supply of homes for sale, and rising prices, have served as headwinds for the sector—as seen by three consecutive months with declining existing home sales between February and April. Housing sales may continue to cool from the pandemic-era peak we saw in 2021, though this should lead to more affordable prices and a potentially healthier long-term outlook for the market.

Risks remain, as does continued growth

May largely saw risks stabilize or in some cases even decline. With that said, the equity market selloffs earlier in the month were a powerful reminder that uncertainty remains. Looking forward, it’s important for investors to balance immediate headline risks with long-term fundamentals for markets and to construct portfolios that can withstand short-term volatility.

The Fed’s plan to tighten monetary policy throughout the course of the year will continue to present a risk for markets, especially if the central bank surprises investors with the timing and size of further rate hikes or balance sheet reductions. The pandemic is another potential risk factor that should be monitored, especially if we see another wave of case growth later in the year. Geopolitical risks from the war in Ukraine and pandemic-induced lockdowns in China could also serve to rattle markets.

Despite those risks, though, economic fundamentals here in the U.S. remain positive and the most likely path forward is continued recovery and growth. The strong job market and sustained healthy levels of consumer and business spending are expected to serve as a tailwind for overall economic growth as we head into the summer months, though we may see some modest setbacks along the way.

Ultimately, fundamentals drive long-term performance; while we may see bouts of uncertainty and potentially periods with market selloffs, a well-diversified portfolio that matches investor goals with timelines remains the best path forward for most. As always, you should reach out to your financial advisor to discuss your current plan if you have concerns.

All information according to Bloomberg, unless stated otherwise.

Disclosure: Certain sections of this commentary contain forward-looking statements based on our reasonable expectations, estimates, projections, and assumptions. Forward-looking statements are not guarantees of future performance and involve certain risks and uncertainties, which are difficult to predict. Past performance is not indicative of future results. Diversification does not assure a profit or protect against loss in declining markets. All indices are unmanaged and investors cannot invest directly into an index. The Dow Jones Industrial Average is a price-weighted average of 30 actively traded blue-chip stocks. The S&P 500 Index is a broad-based measurement of changes in stock market conditions based on the average performance of 500 widely held common stocks. The Nasdaq Composite Index measures the performance of all issues listed in the Nasdaq Stock Market, except for rights, warrants, units, and convertible debentures. The MSCI EAFE Index is a float-adjusted market capitalization index designed to measure developed market equity performance, excluding the U.S. and Canada. The MSCI Emerging Markets Index is a market capitalization-weighted index composed of companies representative of the market structure of 26 emerging market countries in Europe, Latin America, and the Pacific Basin. It excludes closed markets and those shares in otherwise free markets that are not purchasable by foreigners. The Bloomberg Aggregate Bond Index is an unmanaged market value-weighted index representing securities that are SEC-registered, taxable, and dollar-denominated. It covers the U.S. investment-grade fixed-rate bond market, with index components for a combination of the Bloomberg government and corporate securities, mortgage-backed pass-through securities, and asset-backed securities. The Bloomberg U.S. Corporate High Yield Index covers the USD-denominated, non-investment-grade, fixed-rate, taxable corporate bond market. Securities are classified as high-yield if the middle rating of Moody’s, Fitch, and S&P is Ba1/BB+/BB+ or below. One basis point is equal to 1/100th of 1 percent, or 0.01 percent.